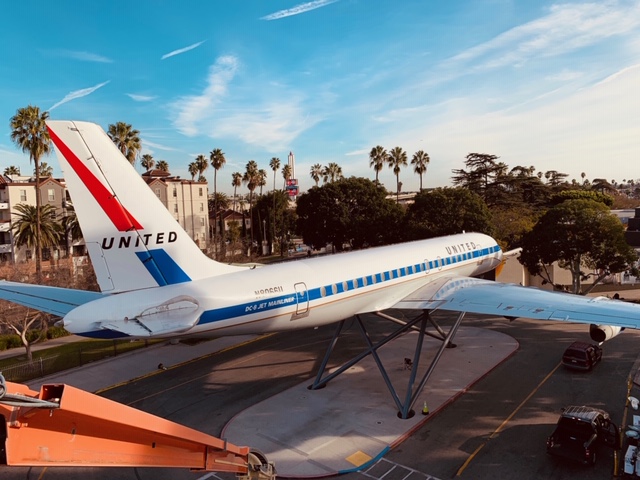 Science students in the US are getting a daily dose of inspiration from a retired United Airlines Douglas DC-8 aircraft which has been lovingly restored.

After flying more than 18 million miles in 14 years, the plane – named The City of Los Angeles – was donated by United Airlines to the California Science Center in 1984. It’s now on static display by the entrance to the Dr Theodore T. Alexander Jr. Science Center School.

The newly restored plane was retired in 1980 after carrying more than a million passengers. Four years later, its wings were removed, and it was towed through city streets before being reassembled at the museum, eventually being mounted on a pedestal in 2002.

Dave Patterson, IAC’s Executive Vice-President of Sales and Marketing says, “IAC has painted hundreds of aircraft for United Airlines over the past 20 years. When approached to lead the restoration and repaint efforts for their DC-8 static display, we jumped at the opportunity. To revisit this historic aircraft and have the chance to paint the retro United livery was an honor. We’re grateful to be part of this effort and to support both our premier customer and our Southern California community.”

“United is thrilled that the DC-8 is being preserved to educate future generations on the history of air travel,” says Janet Lamkin, United’s California President. “We have been part of Los Angeles and California for more than 90 years, and I’m proud to see this important part of our heritage restored so beautifully.”

Adds Dr. Perry Roth-Johnson, Assistant Curator for Aerospace Science at the California Science Center: “We’re thrilled to see our DC-8 airliner restored. With its new paint job, the plane is starting to shine again for the enjoyment of our guests, as well as the students and staff at the Science Center school. We are grateful for the support of IAC, United Airlines, and Akzo Nobel in this important project.”

Akzo Nobel Strategic Account Manager, Robert Mather explains, “We are proud to be part of this project and had no hesitation in donating our Eclipse coatings for such an incredible aircraft.  The DC-8 has a remarkable history, which can’t fail to inspire the young people who see this one every day.”

Only a handful of DC-8 airplanes are still in use today as cargo carriers. The DC-8 also has a little-known claim to fame. It is one of only two aircraft – along with the Soviet Tu-144 – to have flown supersonic before Concorde